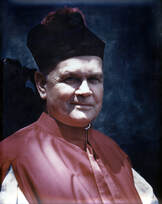 The antecedents of St. Luke Parish were missionary sites in River Forest. As early as 1865, a predecessor was called St. Thomas Mission, popularly known as the Harlem Mission. Harlem was the name of the little area which officially incorporated as River Forest in 1880. The mission was served successively by several pastors from established churches such as Our Lady of Sorrows in Chicago and Immaculate Conception in Elmhurst. The predecessor of the present church building was established by Father John Waldron in 1887. Father Waldron renamed the parish St. Luke to distinguish it from St. Thomas Parish in Chicago. Construction cost $10,000, and the parish grew to nearly 1,000 members by 1893, the year Father Waldron died suddenly.

Our next pastor was Father Richard Dunne, who came from St. Gabriel Church in Chicago. He built a rectory in 1894 and remodeled the church in 1902. The parish served River Forest, Oak Park, Maywood, Forest Park and Melrose Park. Father Dunne was instrumental in encouraging Dr. John W. Tope to bring the Sisters of Misericordia to staff Oak Park Hospital, which was dedicated in 1907. Father Dunne died quite suddenly that year while visiting his brother Edward, the Bishop of the Diocese of Dallas.

Father Thomas A. Burke succeeded Father Dunne. He had been an assistant at St. Cecilia Parish in Chicago. The number of parishioners and the income of St. Luke Parish were reduced in the first decade of the 1900s with the creation of neighboring parishes: St. Edmund and Ascension in Oak Park, St. James in Maywood, and St. Bernardine in Forest Park. Due to ill health, Father Burke resigned as pastor in 1920.

Father David L. McDonald from Immaculate Conception in Elmhurst was then appointed pastor. He supervised the planning and construction of the first school, a $65,000 brick, one-story structure at Lake Street and Ashland Avenue. Its layout was considered quite novel at the time and included a four-lane bowling alley in the basement. A number of current alumni have fond memories of playing there. Archbishop George W. Mundelein dedicated the school October 21, 1921, and placed it under the care of the Sinsinawa Dominican sisters, who continued to staff the school until the 1980s. Then in 1924 Father McDonald was appointed pastor of St. Andrew's in Chicago.

He was immediately succeeded by Father Thomas A. Canty, who had been an assistant at Chicago's Visitation Parish. Father Canty served faithfully and well for 42 years, and remains in the memory of many older parishioners today. During the Great Depression many schools cut teachers and shortened the school year to save money.  St. Luke School, however, did not do it.  Under Father Canty it remained stable.

Father Canty also began planning the present Tudor Gothic church, designed by architects McCarty and Smith and built on the site of the old church. The new structure, costing $240,000, was completed in time for Christmas Mass in 1936. The new church was dedicated with a ceremony and Mass over which the Archbishop presided in 1937, shown here. The rectory, designed by the same architects, was completed in 1939.

The congregation and school continued to grow. In 1949 when now Monsignor Canty celebrated the 50th anniversary of his ordination, there were 1,158 families representing 4,632 person in the parish. School enrollment was 678. Since the school population continued to grow, the old building became inadequate and was torn down in 1954. The new building was begun that year, partially occupied and completed. Its gymnasium was the largest of its time compared to other local grammar schools, and has served as the center of many interscholastic tournaments and countless parish parties such as St. Patrick and St. Joseph celebrations.

Monsignor Canty became Pastor Emeritus in 1961, and continued residence in the rectory until his death on July 13, 1971 at the age of 89. Many older parishioners have vivid memories of the shy, quiet but most effective and productive pastor. As his successor, Father John Fahey said at Monsignor's funeral, "No one else will ever do for the parish what he did."

Father John Fahey became pastor in 1961. He had been a professor of theology, archeology and history at St. Mary of the Lake Seminary, and had studied at length in Rome. After his appointment to St. Luke he continued to teach theology at Loyola University for a number of years. In 1965, under Father Fahey's leadership, the first Parish Lay Advisory Board was formed to assist the pastor in all phases of the parish. Then Father Fahey undertook another major project: the planning and completion of a new convent in 1968.  He also was instrumental in St. Luke being "twinned" with the inner-city parish of Blessed Sacrament, through a program of tuition and scholarship support that has grown steadily and remains strong today. Over time, other services were added such as legal and medical aid and a learning center for children and adults.

By 1978 parish membership totaled 1,700 families. Father Fahey's years as pastor saw the beginning of Christian Family Movement groups, lecture series on spiritual and intellectual enrichment, a Senior Citizens Club, and the training and use of laypersons as lectors, commentators, Eucharistic ministers and ministers of care (bringing the Eucharist to hospitalized and home-bound parishioners). Father Fahey led a plan fostered by the Archdiocese to bus some inner city students to St. Luke School.  Though the plan had some support, Father Fahey withdrew the concept due to considerable opposition. In April 1976, Father Fahey was appointed Urban Vicar of Region VII, which embraced 38 parishes. In 1981 he became Pastor Emeritus and lived in the Rectory until nearly the end of his life.

Father Fahey is remembered for his leadership, quick wit, his parodies at parish gatherings, but above all for his reverence for the Mass and his skills as an elegant homilist. He was chosen from all the priests of the Archdiocese to give the homily at the funeral of John Cardinal Cody.

Father James Moriarty came to lead the parish in 1982. With much pastoral experience, and as founding director of the Chicago's Catholic Television Network, he brought a wealth of administrative leadership to the parish. He sought to build on the lay leadership efforts begun by Father Fahey, and opened up more mutual dialogue with parishioners. Many of his goals arose from the "Human Needs Assessment" and "Idea Sharing Forum." He fostered the "Renew" program from 1983 through 1985. This most successful program deepened spiritual growth through a series of faith-sharing and small group prayer experiences, and surfaced many future parish leaders. Father Moriarty also established a Pastoral Advisory Committee and a Parish Finance Committee.

In line with the Bishops' Document on Liturgy and Environment, Father Moriarty and many parishioners attended Archdiocesan workshops, and a Liturgical Committee began meeting over a two-year period to discuss how to change the physical environment to focus on the Eucharist and to foster the spirit of community worship. Liturgical experts and architects were employed and a plan was eventually developed.

The major components of the restoration included complete cleaning and redecorating, total replacement of the electrical and sound systems, creation of a daily Mass chapel named for Father John Fahey, placement of a new Baptismal font, and relocation of the crucifixion scene that had stood above the altar. The altar, itself,  was reconfigured nearer to the congregation and in close proximity to the pulpit. A new organ was installed. These changes were not universally popular, especially among those who did not fully appreciate the requirements of the new environment to carry forth the spirit of worship defined by the Vatican II Council.

Father Paul Reicher became the next pastor in 1988, the same year the renovation plans were implemented. Father Reicher had previously served as pastor of St. James Parish in Maywood for many years. He had studied and was ordained in Rome before a series of assignments in the Archdiocese. His first major decision was to approve the renovation plans developed under Father Moriarty's' pastorate. With some modifications the work proceeded as planned, financed by the generosity of parishioners, particularly via multi-year pledges.

During his 12 years at St. Luke, Father Reicher demonstrated his strong commitment to social justice, and to increasing the responsibility and leadership of the laity in parish matters. He took an active role in the work of the Peace and Justice Committee, which acted on such issues as elimination of the death penalty, training of parishioners on racism, and working to erode economic barriers to justice and equality in our society.

Father Reicher also rallied parish participation in United Power for Action and Justice, a metropolitan-wide effort involving religious institutions, labor unions, neighborhood development groups and health care providers committed to ridding society of some of the causes of its most serious social problems. Two broad-based programs have resulted. One, the Gilead Project, seeks to find ways to provide health care to hundreds of thousands of Chicagoans who are uninsured. The second program, the Nehemiah Project, is working to build affordable housing.

Father Reicher's love of Scripture led to numerous programs in which he shared his deep knowledge of the Bible with the parish. His focus on Scripture also was manifest in his scholarly homilies and great emphasis on the Liturgy of the Word in the Mass. In May 2000 he retired from the pastorate of St. Luke and was succeeded by Father Kenneth Fischer.


Fr. Fischer, along with an active Parish Pastoral Council, worked on improving communications through expansion of the Sunday bulletin, introduction of a parish website, and social media. The parish experimented with a Neighborhood Ambassador Program, which used divided up the parish into smaller sections that each had an "ambassador" to facilitate the information flow to and from the neighborhood residents. Fr. Fischer also oversaw the the celebration of the parish's 125th anniversary in 2012 and the 125th Anniversary Capital Campaign, which raised $2.3 million in pledges for much-needed renovations to the church, school, and grounds.

Fr. John Szmyd was appointed as our current pastor when Fr. Fischer retired from active ministry in June 2015. Fr. Szmyd, who spent 15 years as Liturgy Director and faculty member at Mundelein Seminary, has also taken a special interest in the parish liturgies. He shepherded the creation of the parish team that implemented ideas from the Archdiocesan Parish Transformation Program as well as planning for the Renew My Parish initiative that aims to increase the effective mission of each parish through shared collaboration of ideas and resources.

On July 1, 2021, St. Luke merged with St. Bernardine in Forest Park to create one unified parish as a result of the Renew My Church initiative. Fr. Stanislaw Kuca, a native of Poland who is now incardinated as a priest of the Archdiocese of Chicago, became pastor of the new St. Luke and St. Bernadine Parish. St. Luke School continues its 100-year-old mission of providing Catholic education for the parish and the greater Catholic community around it.

Through the years, St. Luke Parish has been distinguished by the fact that six men have been ordained to the permanent diaconate and have served in a variety of ministries. Three deacons are active in the parish now: Rev. Mr. Robert Slobig, John Baier and Lendell Richardson. Deacon Terrance Norton is retired but still active in social ministries of the parish.

The strength of the parish is most evident, too, in the number of families in St. Luke Parish who are represented in their third and fourth generations. Many of the family members attended the old and present parish schools. There is a strong tendency of young marrieds to eventually move "back home" to St. Luke Parish. But whether one has roots extending for generations in this community or is just establishing brand-new connections here, he or she will find that we strive to live up to our mission statement of "all are welcome in this place."